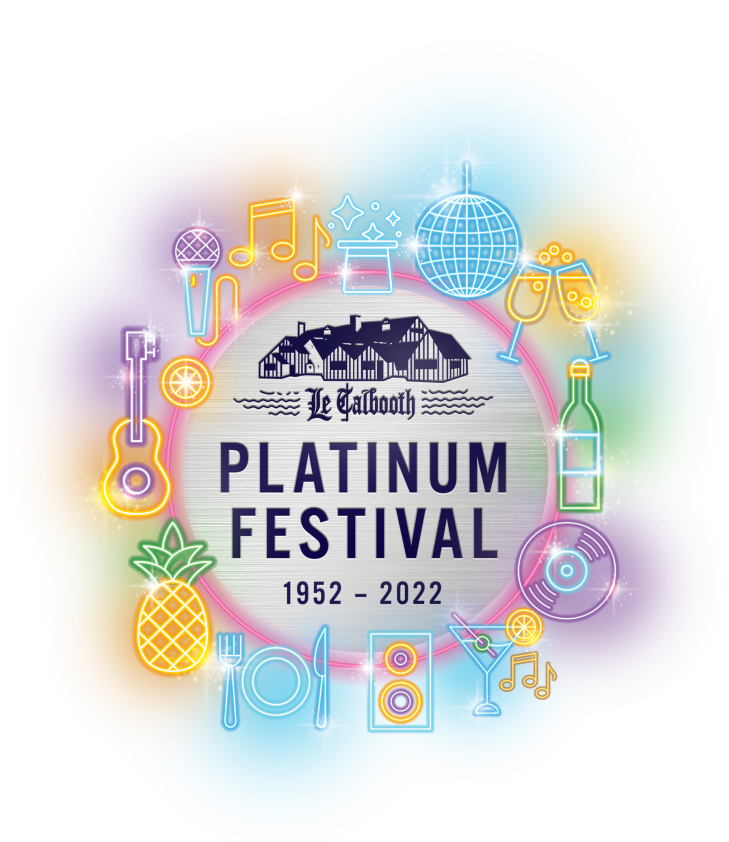 
2022 is a special year in the life of a very special restaurant; Le Talbooth is justifiably the flagship of Milsom Hotels and next year celebrates 70 years with seven spectacular events to celebrate seven decades.

The restaurant was ‘discovered’ by Paul’s father Gerald in 1952, since then the Talbooth has celebrated every important anniversary alongside Her Majesty the Queen!

Much time, thought and fun have gone into the preparation of the Platinum Festival and the marquee will look different at each event. The restaurant will be closed all week, so guests will be welcomed through the front door of Le Talbooth onto the terrace and lawn and then into the Marquee. Expect a touch of glamour as we kick off with the Platinum Ball and travel through the week with plenty of WOW factor as the scene is set each day.

Throughout the week, we will be raising funds for the ABF, The Soldiers Charity, the official fundraiser for the Army which we are proud to support. We have already raised £50,000 for the charity and are delighted to welcome back the Army Band, Colchester to the V E Ball on Saturday 7th May where they will Beat the Retreat on the lawn beside the River Stour.

We do hope you can join us for what promises to be an amazing week; get a group of friends together and book your places online.

‘Seven days of spectacular events to celebrate our seven decades’

Please note, if any of these events have to be cancelled due to Covid regulations, then a full refund will be issued.

Here we are at the start of this amazing week when we celebrate the 70th anniversary of Le Talbooth; we always plan the best parties and The Platinum Ball will be as the name suggests, glamorous and opulent and give us all a chance to don our posh frocks and black ties.

The restaurant will be closed for most of the week and guests will be invited through the main doors of Le Talbooth onto the terrace and lawns beside the River Stour; where our staff will be pouring magnums of Moët et Chandon Champagne with delicious canapés and accompanied by a cocktail DJ. Then into the marquee for a sumptuous three course dinner where the marquee will be dressed for the occasion and joining in the ‘Platinum’ theme.

Welsh tenor, John Pierce will entertain us during dinner with renditions from the opera and West End shows.  After dinner, it’s the turn of ‘The Gifted’, an amazing live band.  Book your place today, the Platinum Ball will set the scene for the week and prove to be a truly glamorous affair!

Every event chosen through the week is there for a reason; when Paul’s father Gerald ‘discovered’ Le Talbooth in 1952, the restaurant was a tearoom so it was always on the cards for one of the parties to have a tea theme especially on a Bank Holiday Monday!

Join us at 4pm for a glass of Moët Champagne on the lawn before a cocktail and afternoon tea in the marquee, a slightly later start time means that the tea will include both sweet and savoury.  During tea, Casper Clarke will entertain us with a medley of songs before being joined by his band, who’ll ramp up the tempo for dancing.  Kathleen, the river boat will be available all afternoon, enabling guests to hop on board and enjoy the River Stour from a different perspective.

While Le Talbooth celebrates 70 years so too does the long association and friendship between the Milsom and Wheeler families.  Richard Wheeler was in fact Gerald’s first visitor to the Talbooth, he was passing and called in to introduce himself and the businesses have been intrinsically linked ever since.

We see the Wine and Food Safari to be a relaxed and fun party where we will be joined by up to ten producers from across the world:

all of which are part of the ‘Wheeler’ stable. During the tasting, guests can enjoy canapés to complement the wines.  Each tasting station will be manned by one of our nine Head Chefs, seven of which have been appointed Master Chefs of Great Britain in 2022.

After the tastings, it’s the turn of Nyetimber, the world class English sparkling wine producer.  Carrying on the relaxed theme, its then time to wander across the lawn where bowl food and dessert canapes will be served on the terrace at Talbooth accompanied by the ever-popular Steel Band.

The event starts with the wine tastings at 4.00pm, bowl food from 6.30pm with the evening finishing at about 9.00pm.

Michael J Fitch has been a long-time friend of Le Talbooth and the Milsom family, he is a world-renowned magician who brings a certain sense of fun and excitement to any party.

During lockdown, he joined up with Matt Cardle (X Factor winner 2010) and they put on a several online gigs for various charities.  The theme for the evening is a clubby atmosphere with subdued lighting, dinner is a selection of tapas style starters followed by steak and a dessert. It’s Wednesday night, the middle of the Festival week, it’s just a case of relaxing, sitting back and letting these two Essex boys entertain you.

At every milestone anniversary at Le Talbooth be it 40, 50 or 60 years, we always include a special wine dinner with the Wheeler family; this dinner promises to be the wine dinner of the seven decades.

The association with the Bordeaux region and the Sichel family goes back to the 60s when Gerald Milsom first visited with Richard Wheeler. Charlie Sichel will be flying in especially from Bordeaux and during the evening we will be tasting eight Bordeaux wines from Chateau Angludet and Chateau Palmer to accompany the dinner designed by Talbooth Executive Chef, Andy Hirst. At the start of the evening, there will be a Krug and canapés reception, again the Milsom family have a great relationship with Krug, Paul worked on the harvest in 1982, which was an exceptionally good vintage for Champagne and Henri and Remi Krug were always regular visitors to Dedham.

The ever-popular BBQ has always been a signature party over the decades at Le Talbooth so we just had to include a spectacular Caribbean BBQ in the Festival week.

Enjoy a Rum punch on the lawn before a two course BBQ in the marquee – which will be themed to match the Caribbean vibe with a riot of colour.  Entertainment will come from two Samba dancers (maybe we can all give it a try), the Steel Band and Dreamwave DJ. Cocktails will abound from Basil’s Bar, not quite Mustique but we are beside water! And the dress? ‘Dress as colourfully as you dare’.  We know that this is going to be one of the most popular events of the week, the last marquee BBQ sold out within 24 hours so buy your tickets without delay!

We’re stepping back in time for our last party, to 1945 in fact, to celebrate the 75th anniversary of VE Day (plus 2 years). During the week, as already mentioned, we will be raising money for the ABF, the Soldiers Charity. This  has some significance as Gerald Milsom served his National Service in the Army Catering Corps and thus begun his love for cooking and hospitality.

Back in time too as Le Talbooth has already seen ‘VE Day 40 Years On’ in 1985, so it seemed right to bring the 75th anniversary back home to Dedham in 2022.  The Colchester Army Band (formerly the Para Band) will be Beating the Retreat on the lawn during a Moët Champagne and canapés reception before we are called to a three-course dinner in the Marquee (not a ration in sight we promise).  The Army band, Dreamwave DJ and a 1940s’ singer will entertain us during the evening.  For this event only we have also included your wines with dinner and the famous toffee vodka (if you know, you know).  The car park will have a huge range of 1940s’ vehicles on show so dress for the era. Make an entrance if you have a vintage vehicle and prepare for an evening of entertainment and nostalgia at our final event of the Platinum Festival.