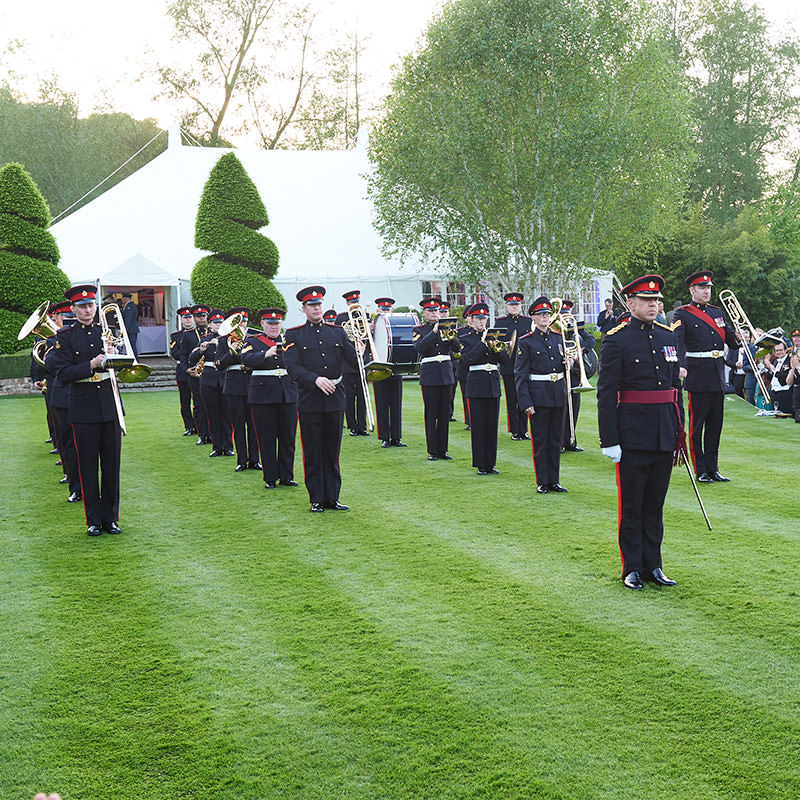 Talbooth Restaurant in Dedham raises £70,700 for ABF, The Soldiers Charity.

The Talbooth Platinum Festival billed as ‘seven days of spectacular events to celebrate seven decades’ took place at the restaurant from Sunday 1st to Saturday 7th May. Each party was chosen to represent a certain time in the history of this much-loved restaurant on the banks of the River Stour in Dedham.

The first party was the Platinum Ball, where over 160 guests enjoyed an evening of glamour, fun and entertainment – all in all a brilliant start to the week.  This was followed by a Champagne Tea Party, when Gerald Milsom discovered the Le Talbooth in 1952, the business was in fact known as ‘Le Talbooth Roadhouse’ serving lunch, afternoon tea and dinner. Some 10 years later in 1962, the restaurant served its last tea so a special afternoon tea party had to be included.

While the Talbooth Restaurant celebrates 70 years so too does the long association and friendship between the Milsom and Wheeler families.  Richard Wheeler was in fact Gerald Milsoms first visitor to the Talbooth; he was passing and called in to introduce himself and we have been buying wine from the Wheelers ever since.

On Tuesday, the Talbooth held a ‘Wine and Food Safari’ in the Marquee with 200 guests, tasting wines from regions and countries throughout the world, for added interest the Milsom Hotels chefs matched canapés to the country offering an interesting food and wine paring.

And then onto a Music and Magic night, the ‘Magic’ being provided by Michael J Fitch, a family friend who really got the party started with a combination of fun and amazing magic.  The ‘Music’ was from Matt Cardle (X Factor winner 2010) who entertained with a variety of new and old songs.  It was a fabulous evening and it was great to have two local Essex boys sharing the stage at the Talbooth.

Thursday night was the turn of the Bordeaux Dinner where some 160 guests enjoyed wines from ‘Maison Sichel’ accompanied by a four-course dinner from the Talbooth kitchen; this party was also in conjunction with Mr Wheeler Wine.

Friday night was the Caribbean BBQ Ball with amazing tropical flowers, magic, steel band and Samba dancers.  Always one of the most popular Marquee events we couldn’t leave a BBQ out of the week’s events.

And finally, on to the V E Ball which for many was the highlight of the week.  Guests were greeted by vehicles from the WW2 era – jeeps, motorcycles, pushbikes, staff cars and ambulances they were all there. Then on to the lawn where The British Army Band, Colchester performed a Beating Retreat before inviting over 160 guests were invited into dinner.  Dancing and entertainment followed for a truly memorable evening and a fitting end to the Platinum Festival. This too, had a place in the history of the Talbooth as the restaurant held a V E Ball on the lawn in 1985.

Paul Milsom said this week ‘just over 2 years ago, the Talbooth was empty and my wife Geraldine and I were missing all our friends, customers and staff.  We decided that when life returned, we’d all be ready for a party and the idea of celebrating the 70th anniversary of the Talbooth sort of grew into the Platinum Festival. I’ve been asked which was my favourite of the seven parties and I can honestly say they were all amazing; the kitchen led by Andy Hirst put on a different menu every night and this coupled with our staff led by Ian Rhodes and Jess Counsell made this a week of everlasting memories. And of course, special mention to everyone who attended the parties, the huge contribution to our fundraising from across the UK and lastly to the many suppliers who helped us deliver the Festival in true Talbooth fashion.

We were happy to raise money for ABF The Soldiers’ Charity during the Platinum Festival for two reasons, first and foremost my father Gerald Milsom served in the Army Catering Corps which instilled in him a love of food and hospitality, without which maybe he wouldn’t have fallen in love with the Talbooth as he drove past in 1952. Secondly, we have worked with the Soldiers Charity on two previous and memorable parties where they provided an Army band and auction prizes that money can’t buy. Now more than ever, the Army needs funds to fulfil their pledge to help ‘their Army family’ and we are proud to add our contribution of £70,700 for the 7 decades that the restaurant has been in our family’.